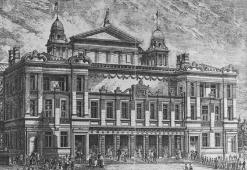 Queen Mary's origins are rooted firmly in East London as early as 1885 when the Drapers' Company undertook to provide funds for the technical schools as part of the People's Palace Project. through to the development of East London College which was first admitted as a School of the University of London in 1907.

Given the multiple institutions in which lay the origins of Queen Mary it is difficult to determine a starting point for the governance of the College. The Charter of Incorporation of Queen Mary was granted in 1934, although the Council of East London College was established as a governing body distinct from the People's Palace in 1913.

There was originally some debate about the name of the College as a chartered incorporation. The proposed name of Queen's College was set aside as it was already in use, and following the Academic Board's non-acceptance of Victoria College as a recommendation, Queen Mary was finally agreed upon.

The Charter and Ordinances of the College constitute the governing instruments and principles on which the conduct of College affairs are based.

Charters were originally granted to Westfield College in 1933 and to Queen Mary College in 1934. The College is currently governed by the Charter of 1989 which has been amended on three occasions in recent years:

The Statutes build upon the core principles of the Charter and these are amplified by the Ordinances as the procedural rules for the conduct of College business. Subsidiary to the top-tier framework is a suite of strategies, regulations and policies. These are accessible through the Policy zone.